About the Kantele Group

Helena Tuupanen
The Kantele Group is a trio consisting of Helena Tuupanen with her twin daughters, Sandra and Anni. Helena Tuupanen comes from a rune song family in Carelia. She has played the kantele since childhood and has long been active as a soloist and as a music teacher. Helena got a kantele as a Christmas gift from her mother. The mother had noticed how eagerly Helena played on the flute that was a compulsory instrument in school. She suspected that Helena would be gifted with music and that it would be good to get her another instrument as well. Helena's great-grandfather had been a kantele player in Carelia so the choice of the instrument kantele was a natural choice. The mother
took a loan and bought Helena her first kantele. 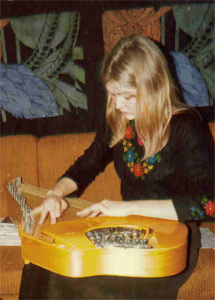 The same evening Helena played some tunes with one finger. Kantele was like made for her. She got lessons from the kantele teacher Tyyne Niikko and made rapid progress, it went so well that she already after a few months, joined the Karelian Kantele Orchestra led by Tyyne Niikko. The Kantele Orchestra toured around in North Carelia and in Finland, they also made a recording in a studio.

During the summer holidays, Helena played for the tourists and baked Carelian pastries at a place called Runonlaulajan pirtti in Ilomantsi by the Russian border. She won the Finnish championship three years in a row and appeared as soloist in Joensuu Symphony Orchestra, where she played the solo part in the Sibelius Tanz Intermezzo on the Kantele. Actually, it was composed for the harp, but the conductor Pekka Paasio thought that in Karelia you could just as easily play it on the kantele.

To have the kantele in the symphony orchestra was a big sensation in the 70s. Nowadays the Kantele appears a lot more frequently in various orchestras and ensembles in Finland.

During 1970-1972, she was a kantele teacher at the Music Institute of Joensuu, which was the only music school in Finland where you could learn how to play the kantele in year 1970. Nowadays, it is possible to study the kantele in about 50 music schools in Finland. There are also several kantele courses in the Sibelius Academy as well as countless folk high schools etc.

Later, Helena moved to Sweden and continued to teach the instrument to other people through the association Kantele and Kalevala Friends, which she co-founded in 1978.

She has toured around with the instrument in various countries both by herself and together with her daughters Sandra and Anni. They have played in Sweden, Finland, Denmark, Germany, Austria, Slovenia, Ireland, Bulgaria and Japan.

The kantele music is also very suitable in a theatrical context. Helena played 2003-2004 the kantele in the Kalevala-piece at the Stockholm City Theater, directed by Lars Rudolfsson. The play had more than 30 sold-out performances and was highly publicized in the media.

Sandra and Anni Häggström
Sandra and Anni started playing the 5-stringed kantele as 3 years old and continued with the bigger kantele when they were 6 years old. As 5 year olds they had their first performances with the 5-stringed kantele at Skansen. In the audience the Swedish king, the queen and the former Finnish President Mauno Koivisto were present. Over the years, Sandra and Anni have played at numerous places around Sweden, Europe and Asia with their mother Helena. Sometimes they also perform solo.

Throughout their school they went to Nacka Music School where they learned to play the cello. They played the cello in Nacka Orchestra and have also sung in various choirs.

Sandra studied one year in Bulgaria and studied the harp for the harp teacher Anna Maria Dean.

The repertoire of the Kantele Group is adapted for every occasion, the group plays everything from contemporary, classical and folk music to romantic songs and ballads.